One Guy Gets Entire Park to Sing Bon Jovi by Jason Kottke
Saturday February 1st, 2020 at 11:10 AM

(Wait for it, wait for it…) One guy, singing Bon Jovi’s Livin’ On A Prayer, gets an entire park to sing along with him. I know this was a tough week for many, but if this doesn’t brighten your day, I do not know what will.

See also Leadership Lessons from the Dancing Guy, which I swear is related. (via open culture)

anthonylatta
reply
One of my best memories was when I did something similar. Heading to a baseball game full of fans, the train car was packed. I started singing "Take me out to the ballgame," and the entire car started singing. It was a minute of smiles and laughter. I'm sure others have similar memories...
Washington, DC

Today, we’re unveiling the new Dropbox. It’s the Dropbox you know and love, but better. It’s a single workspace to organize your content, connect your tools, and bring everyone together, wherever you are. The first thing you’ll notice is an all-new Dropbox desktop app that we’re introducing today through our early access program. It’s more than an app, though — it’s a completely new experience.

Now it’s a monstrosity that embeds its own incredibly resource-heavy web browser engine. In a sense Steve Jobs was right — the old Dropbox was a feature not a product. But it was a feature well-worth paying for, and which made millions of people very happy.

If iCloud Drive folder sharing works as well as promised when it ships this fall, I’ll probably ditch Dropbox completely. There’s simply no clarity to this new Dropbox. I don’t even understand much of what Dropbox is saying it can do. I think they’re trying to be Slack or something? I already have Slack. All I want is a folder that syncs, with sharing.

anthonylatta
reply
I ditched dropbox a few weeks ago once they limited sign-ins to three devices. Feels good.
Washington, DC

Cacotopos
Me too, at the exact same time. Haven't looked back since there are so many alternatives these days.

fxer
reply
I’ve been experimenting with hosting a Seafile server in docker on a VPS to replace Dropbox
Bend, Oregon

satadru
reply
This is one of the problems with using a VC funded closed source product/API as part of your infrastructure. It is inevitable that the company will try to pivot to make more money by leveraging their existing user base and application to do something else.

Not only is it inevitable, but it would violate the fiduciary duty of the company's directors to the company's shareholders not to do so.

The question for you is this: does using the product and being a customer provide some sort of useful secondary gain, whether that be provide more competition in the market or promote something (like a company's products benefiting human rights by the company staring down repressive regimes) that makes that trade-off worthwhile.
New York, NY

ScottInPDX
I'm married to a person who has had Dropbox for years, and I can't see any way it's better than Google drive. There are plenty of ways it's worse, and it looks like there's more of that coming. I have a Dropbox account to store a couple of things I don't want in Google drive, but that's probably going to change soon as well. This push to be everything is only going to muddy the waters and frustrate people. Probably not the best strategy for a company whose core competency is being a file sharing and storage provider...

ktgeek
reply
I'd really like to drop Dropbox completely, and this might be the moment, but it would be great if I could get my iCloud Drive on other platforms. Ok, frankly, just my linux box at home.
Bartlett, IL

The Email Larry Page Should Have Written to James Damore by John Gruber
Wednesday August 16th, 2017 at 8:55 PM

The Economist, writing from the point of view of Larry Page:

Your interpretation is wrong. Your memo was a great example of what’s called “motivated reasoning” — seeking out only the information that supports what you already believe. It was derogatory to women in our industry and elsewhere. Despite your stated support for diversity and fairness, it demonstrated profound prejudice. Your chain of reasoning had so many missing links that it hardly mattered what your argument was based on. We try to hire people who are willing to follow where the facts lead, whatever their preconceptions. In your case we clearly made a mistake.

Really strong piece that crystallizes my thoughts on this matter.

Sune Engel Rasmussen and Pádraig Collins, reporting for The Guardian:

The daughter of Pakistan’s prime minister has become subject of ridicule in her home country after forensic experts cast doubts on documents central to her defence against corruption allegations. […]

Documents claiming that Mariam Nawaz Sharif was only a trustee of the companies that bought the London flats, are dated February 2006, and appear to be typed in Microsoft Calibri.

But the font was only made commercially available in 2007, leading to suspicions that the documents are forged.

In a separate email, de Groot, the font designer himself, said that while in theory it would have been possible to create a document using Calibri in 2006, the font would have to be obtained from a beta operating system, “from the hands of computer nerds”.

“Why would anyone use a completely unknown font for an official document in 2006?” he went on to question.

This is why I use Comic Sans for all my official documents. Tried and tested.
Washington, DC

A duo called Palette-Swap Ninja has produced a mashup of Star Wars and the entirety of the Beatles’ Sgt. Pepper’s Lonely Hearts Club Band album. Each song on the album is paired chronologically with a scene from the movie:

Princess Leia’s Stolen Death Star Plans (Sgt. Pepper’s Lonely Hearts Club Band)
Luke Is In The Desert (Lucy In The Sky With Diamonds)
Being From The Spaceport Of Mos Eisley (Being For The Benefit Of Mr Kite!)

The effort here is amazing, particularly when this whole thing is going to get yanked at some point soon — it’s a race between Disney and Sony for quickest takedown notice. The whole video playlist is here and you can download the full album on their website or stream it on Soundcloud. (thx, tim)

Ballston Gets Free ‘Gigabit-Capable’ Wi-Fi in Public Spaces by Chris Teale
Thursday March 9th, 2017 at 6:34 AM 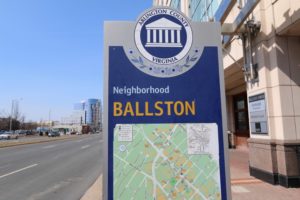 Free district-wide Wi-Fi is launching in Ballston this month, promising to deliver a high-speed and seamless internet connection.

BLinked is available throughout Ballston’s public areas, thanks to a partnership between the Ballston Business Improvement District and Rockville-based startup Wi-Fiber. The BID says it is the first seamless, district-wide network in the region.

Wi-Fiber developed a system to serve the more than 30,000 people that work in Ballston. More than 30 discreet antennae relay signals connect all of Ballston’s outdoor public spaces to the “gigabit-capable” network, according to a press release.

Using algorithms to track data usage patterns throughout the neighborhood, BLinked also reads and interprets network activity in real time. It then uses the gathered data to redistribute resources to meet traffic and usage demands, meaning that users should not experience slow-downs.

“This is the next step in making Ballston stronger, smarter, and safer,” said Tina Leone, CEO of the Ballston BID. “We’re proud to be the first to meet the impending need for public connectivity, and we anticipate this inspires new information and communication infrastructures throughout Arlington and across the region.”

Such programs have been requested by local business leaders, including Monumental Sports & Entertainment chairman Ted Leonsis in an interview with the Washington Business Journal last month.

A similar initiative has been undertaken in New York City through LinkNYC, which has worked to replace pay phones in the city with so-called “Links,” which provide services like high-speed Wi-Fi, phone calls, a tablet for maps and city services and charging outlets.

The new Wi-Fi network can help reduce strain on traditional cellular networks, which can crumble under heightened activity in crisis situations.

Chase Donnelly, a founding partner of Wi-Fiber, said the move to area-wide Wi-Fi can help integrate electric grids, water systems, stoplights and more into the Internet system to improve efficiency.

“This network could one day serve as the spinal cord for the city’s infrastructure,” Donnelly said in a statement. “This vision people have about the next generation of cities in which everything is interconnected, that’s what we’re providing the foundation for.”

Update at 3 p.m. — A PR rep for the BID clarified that the network is “gigabit-capable,” not “gigabyte-capable” as stated in the press release. The network is currently being tested and is expected to be available to the public by the end of the month.